What is a VPN connection, what is it for and what advantages does it have? 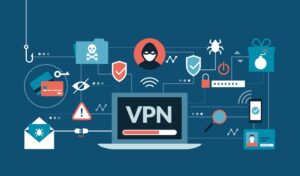 Let’s explain what a VPN connection is, what it’s for and what benefits it has. VPN connections are by no use in a new invention, but that’s when they’re starting to catch traction from the general public. While their use was traditionally more common in the business environment, the great versatility of such connections and their multiple uses make them increasingly popular.

Precisely that versatility that we were talking about is the same one that creates some other confusion about what exactly these VPNs are, because it increasingly relates to VPN connections with”evil”(with large quotation marks), because some of its applications include the leap of geographical locks,greater anonymity on the Network or even the blocking of advertising.

What is a VPN

To connect to the Internet, your mobile, PC, TV, and other devices usually communicate with the router or modem that connects your home to your Internet provider, either wired or wirelessly. The components are different if you’re using your mobile’s data connection (which includes your own modem and talks to the phone antenna) but the essence is the same: your device connects to another, which connects you to the Internet.

The most normal thing is that you don’t have one, but several devices connected to the same router: mobiles, computers, consoles… In this case, each will be assigned a local IP address, which is not visible from the Internet. This is a local network, a set of connected devices so that they can share files and printers without having to go over the Internet.


A VPN connection allows you to create a local network without having its members physically connected to each other, but over the Internet. It’s the “virtual” component we talked about before. You get the advantages of the local network (and some extra one), with greater flexibility, because the connection is over the Internet and can for example be from one end of the world to the other. 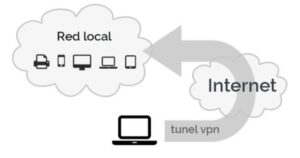 Using VPN, the laptop can be joined to the Corporate Network as if it were thereHowever, it is another peculiarity of VPN connections that is making them so fashionable today: data tunnels. Normally, while using the Internet, your device contacts your Internet provider, who connects to the various web services to offer you, for example, YouTube videos. 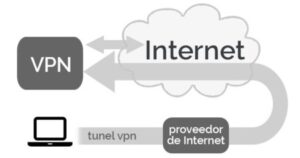 Instead of connecting to the Internet directly, you do so through a VPN serverWhen you connect to a VPN connection, this changes. All your network traffic continues to go from your device to your Internet provider, but from there it goes directly to the VPN server, from where it will depart to the destination. Ideally, the connection is encrypted, so your Internet provider doesn’t really know what you’re accessing. For practical purposes, your IP address is that of the VPN server: in many ways it is as if you are physically there, connecting to the Internet

What VPN connections are for

Surely with the above explanations, you have already imagined a few situations in which VPN connections could be useful. It’s an open secret that’s especially important in the corporate environment, but its uses don’t end much less there. These are the main uses of VPN connections.


The most obvious use of a VPN connection is interconnectivity in networks that are not physically connected, such as workers who are currently out of the office or companies with branch offices in multiple cities that need access to a single private network.
From a security point of view, allowing indiscriminate access to a company’s own network from the Internet is little less than crazy. Even if access is password protected, it could be captured on a public WiFi access point or sighted by a malicious observer. 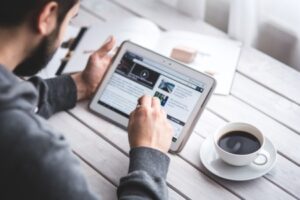 Telework and VPN are concepts that often go hand in handInstead, the risk decreases if the worker and the company connect using a VPN connection. Access is protected, the connection is predictably encrypted, and the worker has the same access as if he were in person there.

With the heyday of the Internet and the picaresca of both content providers and users, other, more playful uses of VPN connections have become popular, many of them related to a very simple concept: falsizing where you are.

When you connect to VPN, your device communicates with the VPN server, and it’s the VPN server that talks to the Internet. If you are in China and the VPN server is in the United States, usually web servers will believe that you are browsing from this country, letting you access the content available only there, such as Netflix.


Similarly, this same logic can be used to access content that was censored or blocked in your country,but not where the VPN server is located. This is how millions of Chinese citizens manage to connect to Facebook and 3,000 other blocked websites in the country.


Although not strictly necessary, it is common for VPN connections to be accompanied by encryption of the packets that are transmitted with them, so it’s normal to hear the recommendation that if you need to connect to a public Wi-Fi hotspot, at least use connect to a VPN.

Privacy in Windows 10: How to view and change the data you send to Microsoft and third-party appsSigning in to your bank accounts while connected to a public WiFi network you don’t trust is probably not the best idea in the world, as it’s relatively easy for a thief to capture unencrypted packages and get hold of your user accounts. This is where the extra layer of security you can get through a VPN connection comes in, as packets would be sent encrypted, so the one you’re listening to probably couldn’t do anything with them.

However, there’s fine print on this, because while you’re suspicious of the public Wi-Fi network, you’re putting all your faith on the VPN server, which can also capture all your traffic, keep records of what you’re doing, or even sell your bandwidth to the highest bidder. A VPN is as secure and useful as your provider. If you don’t trust your VPN, don’t use it,because instead of having an extra layer of security, you’ll have the enemy at home and looking at absolutely everything you do on the Internet.

Unfortunately it is increasingly common for Internet providers to decide to stick their noses in how we send and receive zeros and ones on the Web, and although they love that we visit normal websites, that we download is not so funny: too much traffic,and you are probably downloading something illegal.
Some providers completely block P2P downloads,while others simply boycott it to malfunction and give up on yourself. Just as you can use a VPN connection to prevent censorship of your country, you can also sometimes prevent your Internet provider from boycotting your P2P downloads.


Now that we know what a VPN connection is and what it’s for, it’s time to summarize a list of the advantages and disadvantages of using this technology. First, the positive part:

Privacy on Android 10: how to configure your new (and old) options to respect it to the fullestThings to keep in mind


So far everything very nice, using VPN connections seems to be full of advantages: more security, improved privacy, jump of geographical locks… Before you start buying a VPN service or signing up for a free VPN service, there are a few sections to keep in mind:

Use third-party VPN… or create your own server

The most normal and quick way to start savoring the benefits of VPN connections is to sign up for one of the multiple companies that offer VPN services. You pay a monthly fee that can range from a couple of euros to more than 10 euros and you get the credentials to log in to their service and often an official VPN client of your own that makes things much easier for you.

However, if you want full and absolute control of your connection or don’t trust anyone, you can follow the philosophy of “if you want something well done, you must do it yourself”. The problem with this is that it is rare that you have access to a PC in another country with which you can enjoy some of the advantages that we mentioned earlier (avoid censorship, geographical blockages).

There are some exceptions, such as frequently traveling globe-trotting and installing a VPN on your PC at home can still access your files wherever they are, also enjoying services that were only available in your country, such as Netflix or Spotify.


If you want to create your own VPN server, whether it’s on a Windows PC or a remote server under your control, OpenVPN is probably your best option. You can download it from here,although you are warned in advance that installing a VPN server is not as simple as pressing Next – Next – Next. 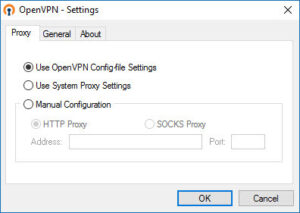 Today every operating system in its more or less current version allows you to connect to a VPN connection without installing anything additional. All you need are the VPN provider’s (or your company’s, if applicable) login details, such as your server address, VPN type, and user credentials.

On Windows it is possible to connect to a VPN network without installing anything additional from there by Windows XP, but support for different types of encryption is more basic the older your version of Windows.


To connect to a VPN network in Windows 7, follow these steps:

In Windows 10 you can also use the following mode with the Modern Interface:

To connect to a VPN server from Linux you will need to have installed the network-manager-vpnc package,which does not come for example installed by default on Ubuntu. To install it you can use the software manager specific to your distribution or the command line:

Android also has its own VPN client, although the way to access it may vary slightly depending on the version of Android you have installed and the menu modifications your manufacturer has made. Generally, you’ll find it here:


On iOS, the process is a little simpler. To connect to a VPN server from your iPhone or iPad, follow these steps:

Benefits of Audio Visual Equipment Hire In The Learning Environment