How to Repair Corrupted Photos?

Photographs, the memories captured by cameras, have emerged as a major chunk of digital data stored in computer systems. Unfortunately, these photographs are prone to corruption and damage. The photos, be it of any file format, may get corrupted owing to various reasons.

It might be a very panicking and irritating situation if your photos get corrupted. But you need not worry as there are ways to repair damaged or corrupted photos. The best solution is to use photo repair software to fix corrupted pictures, videos, audios, and other kinds of data.

In this article, we’ll cover some simplest ways that can help you repair corrupt photographs and make them accessible again. 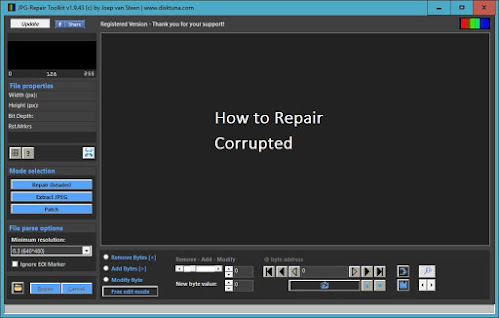 Workarounds to Restore the Corrupt Photos

It is mentioned under the tips for data safety of almost each and every article related to data loss that creating a backup at the right time can save you from a lot of hassle. If you have a backup of your photos, you can use such backup to recover the corrupted photos.

2. Convert Photo into Another Format

It might not sound very promising but converting the corrupt photo into a different format can work wonders as it reformats all the file extensions used in the photo.

It is not such a huge task to change the format of the picture. You can easily get this done by using an online file converter tool.

If the photo has been downloaded from the internet and is not opening, then it is obvious that the file which was downloaded is corrupted.

It may happen because of internet interruption during the downloading process. In such a case, downloading the photo once again will easily resolve the issue.

Here are some solutions to repair corrupt photos:

Bad sectors on the hard disk may result in corruption of data, including photos. This problem could be easily resolved by running the CHKDSK command. Here are the steps to do so:

You can perform SFC scan to resolve file system corruption.It can also help repair corrupted photos. Here are the steps:

The best way to repair the damaged/corrupted pictures is by using a photo repair software such as Stellar Repair for Photo. The software can repair corrupt photos of any file format. Irrespective of the storage media, the software lets you repair all kinds of pictures, including RAW camera images. The software works on both Mac and Windows operating systems.

How to make money on bets: instructions for a beginner and a scheme with minimal risk

How to improve your business using Supplier Information Management

What are the Microsoft Outlook Pii Errors That Exist?