Ethereum and Bitcoin: Historical Comparison of the Two Most Famous Cryptocurrencies

Most traders prefer Bitcoin or Ethereum to other cryptocurrencies. They are the two most popular digital currencies at the moment. There are many differences and similarities between the two. Let’s take a closer look. 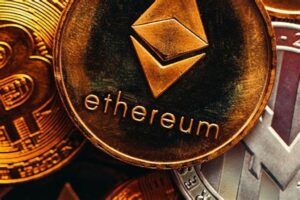 The brainchild of Satoshi Nakamoto has spawned a multi-billion dollar economy and revolutionized the world’s view of the currency. In February 2021, the capitalization of the cryptocurrency market surpassed the $1 trillion mark for the first time in history.

Hundreds of developers have been trying to repeat the success of the first cryptocurrency for 12 years. Still, BTC is holding the leading position.

However, its main purpose has somewhat changed over the years. People began to perceive it as a store of value, and not a currency for every day. It is, first of all, due to its powerful dominance and great liquidity compared to other coins.

If we compare BTC and ETH, it is important to note that the latter is more than just a cryptocurrency and a means of payment. Using blockchain technology, the Ethereum network provides an open software platform to anyone. Solidity technology and programming language are used in smart contract creation. These are self-closing agreements that can ease the transfer of money, property, or anything of value, provided that key variables are met.

Ethereum users can also create their own dApps. By connecting their dApps to the blockchain through a smart contract, users can be certain that their code is executed exactly as written, without the fear of hacking. DApps are currently operating on the Ethereum platform. These include job search websites, games, and more.

To start a dApp, you should pay an Ethereum commission. Besides being a cryptocurrency, it is the “fuel” for building decentralized apps on the network. Each action requires different computing power. The longer you work, the more Ethereum you will pay.

What is similar and what is different?

Both Bitcoin and Ethereum are decentralized and use blockchain technology. This means no bank or another institution regulates or controls them. They are based on distributed ledger technology (DLT). It distributes data via a network of host computers. Given the absence of intermediaries, the costs of transactions are much lower. Thanks to the numerous security measures, the system is transparent and less susceptible to hacking.

Both BTC and ETH can be securely and instantly transferred anywhere in the world for little or no cost.

The main difference between the two is the market cap. As of the beginning of March, BTC capitalization is almost $929 billion, while Etherium’s is only $182 billion. Moreover, the currencies differ in transaction code, block time, and algorithms they operate on.

The overall purpose of Bitcoin is also different from that of Ethereum. While the former was created as an alternative to traditional currencies, the latter serves more as a platform for contracts and application development through the use of its own separate currency.

Bitcoin has come a long way as a means of payment. An American Laszlo Hanech spent 20,000 BTC to buy only two pizzas 10 years ago ($936 million at the current exchange rate). These days, we can exchange BTC to ETHinstantly using a convenient, quick, and trustworthy service like Godex. You can also use cryptocurrency to pay for items in shops, restaurants, and service providers.

Interestingly, Starbucks, Whole Foods, and Nordstrom allow payments in Bitcoin. For this, one should register with the Spend app based on Flexa Network. This is an Ethereum-based payment network like Visa but is applied for cryptocurrency.

Many online stores also accept payment in ETH. Mostly, they are marketplaces based on WooCommerce or Shopify, which allow shops to take Ethereum as payment. Some of the stores are Digitec Galaxus, Peddler.com, PizzaForCoins, and many others.

Litecoin, Bitcoin Cash, Monero, Dash are some of the alternative cryptocurrencies available on the crypto market. They are called altcoins. These are coins that have similar technology to Bitcoin, but each of them solves some of its particular problems like scalability, transaction speed, commission size, anonymity, and so on.

NEO, also known as Chinese Ethereum, is probably the biggest Ethereum competitor in the crypto industry. The NEO project pursues the same goal of automating digital asset management using smart contracts. Besides, it is faster and is backed by the Chinese government. It is considered one of the most substantial advantages of this coin.

However, unlike Ethereum, NEO complies with government regulatory requirements. It ensures that every company that operates on the platform has passed mandatory identification. That doesn’t sound good in the world of decentralized currencies.

Historically, the rates of these two cryptocurrencies were always connected. When BTC grew, ETH grew as well. This suggests that, as a rule, price in the cryptocurrency market is usually formed not by real achievements of a project, but by speculative actions in the industry.

As a matter of fact, the cryptocurrency industry is still considered to be very young. This market still has a lot of maturing to do, and there is room for growth. We can safely say that the digital economy will soon be as integral and common to our everyday lives as electronic payments are now. There is no doubt this will happen sooner or later. And Bitcoin and Ethereum will definitely play a significant role in the process.

What Effects Buying Now and Paying Later Will Have on Your Business Strategies?

Should You Take Advice From Kenyan Poker Players?

Top 10 Machine Learning Applications you Should Know About

Convert Excel to PDF: 3 Online Converter Tools You Can Rely on